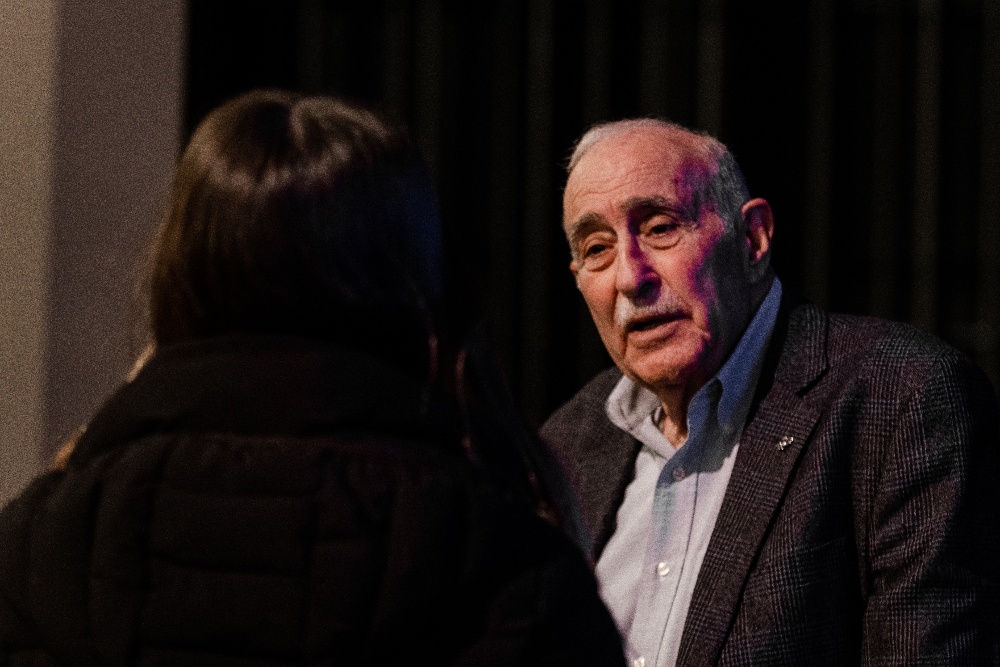 A pair of guest speakers left an indelible impact on students and colleagues during Friends Academy’s annual Peace Week celebration, as they separately spoke to and about their intersecting journeys of courage and compassion.

Leo Ullman and Manfred (Manny) Korman, who now live within a few miles of each other in Port Washington and Great Neck, respectively, traveled to Friends to tell their Holocaust Survivor stories to Middle and Upper School students on the penultimate day of Peace Week.

“You are about to hear a very true story about a man who was separated from his family because of genocide, specifically the Holocaust,” said 8th Grade History teacher Dave Frazer as he introduced Leo Ullman. “We are so fortunate to hear living history – the choices that were made to save him and the amazing choices he made to live,” added Mr. Frazer.

Born in 1939 to an established Dutch Jewish family in Holland, Mr. Ullman’s father worked in the diamond business and his mother was fully assimilated into Dutch society; an important point that Mr. Ullman would say both saved his life and served as a powerful lesson. Following Hitler’s invasion of a once-neutral Holland in September 1939, Mr. Ullman’s parents initially tried to escape to London (payable only with coin, not paper), but could not find passage and returned home. Two days later, Germany sealed the borders. “But we were alive,” remarked Leo. 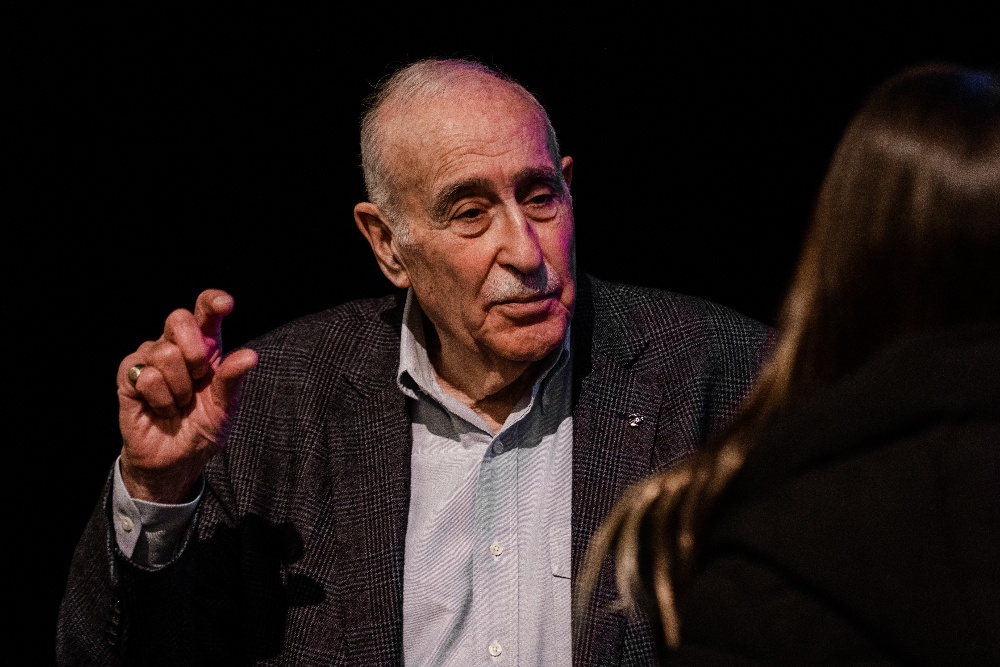 As the life they knew was beginning to deteriorate, and more and more Jewish families were being deported, the Ullmans formulated a plan with the help of the Dutch Resistance. “At that point, the Germans were not killing anyone,” said Leo. “They were trying to deport Jews, but countries, including the U.S. refused to give them entry.”

Unable to attend public school, go to restaurants, have a vehicle or bicycle, visit the grocery store, own a radio, and more, Leo’s parents procured false IDs and made the difficult decision to hand their infant son over to a young Dutch couple (and later the young husband’s father and girlfriend, whom Leo affectionately referred to as his “War Mother and Father”), while they remained in hiding in the attic of a house without heat, electricity, and only a small window – for three years.

“My father never left their hiding place,” shared Mr. Ullman. “My mother, only a handful of times,” adding that his parents' situation turned even more tenuous after the rent they were paying to the people hiding them ran out. 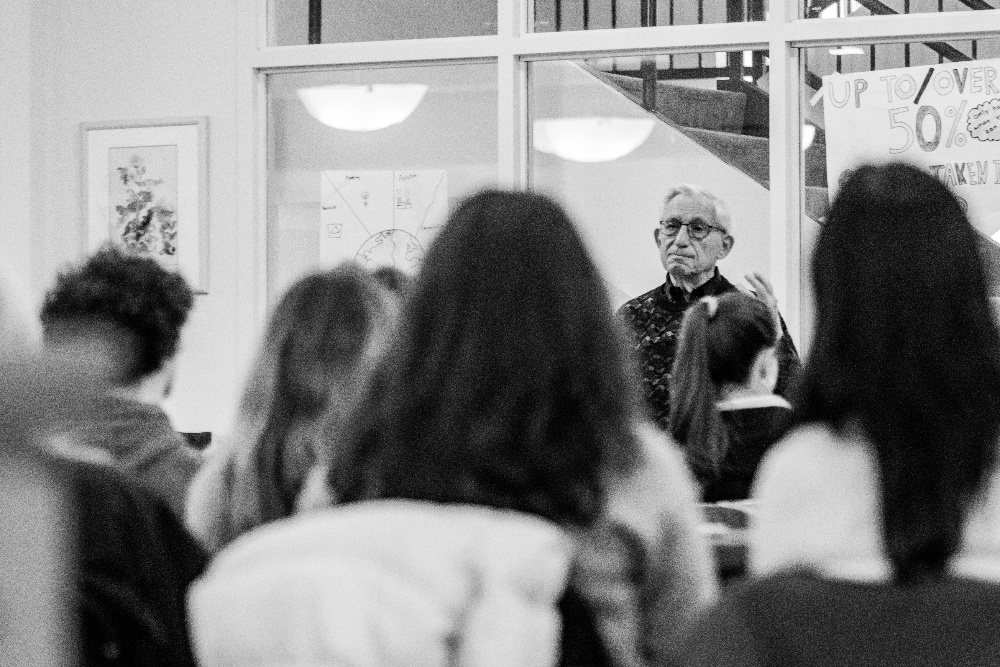 In Hamburg, Germany, another story of escape and hiding was unfolding to Manfred (Manny) Korman, who was between six and seven years old. “It was Oct. 20, 1938, and there was a knock at my door. We were told we had between 30-60 minutes to pack our bags and head to the police station,” recalled Mr. Korman. Germany was collecting all families whose heads of household were from Poland. Hustled into a departing train, the Korman family was forced off at the last town in Germany before Poland. “We had German soldiers with guns behind us and Polish soldiers with guns in front of us,” said Mr. Korman. Manny’s father was able to find a rented room in a farmhouse and there they stayed until April 1939. “It was Passover and my parents were informed that heads of households could return to Germany to take care of their homes. My father, who rarely waved, waved goodbye to us with two hands. We didn't know if we would ever see him again.” 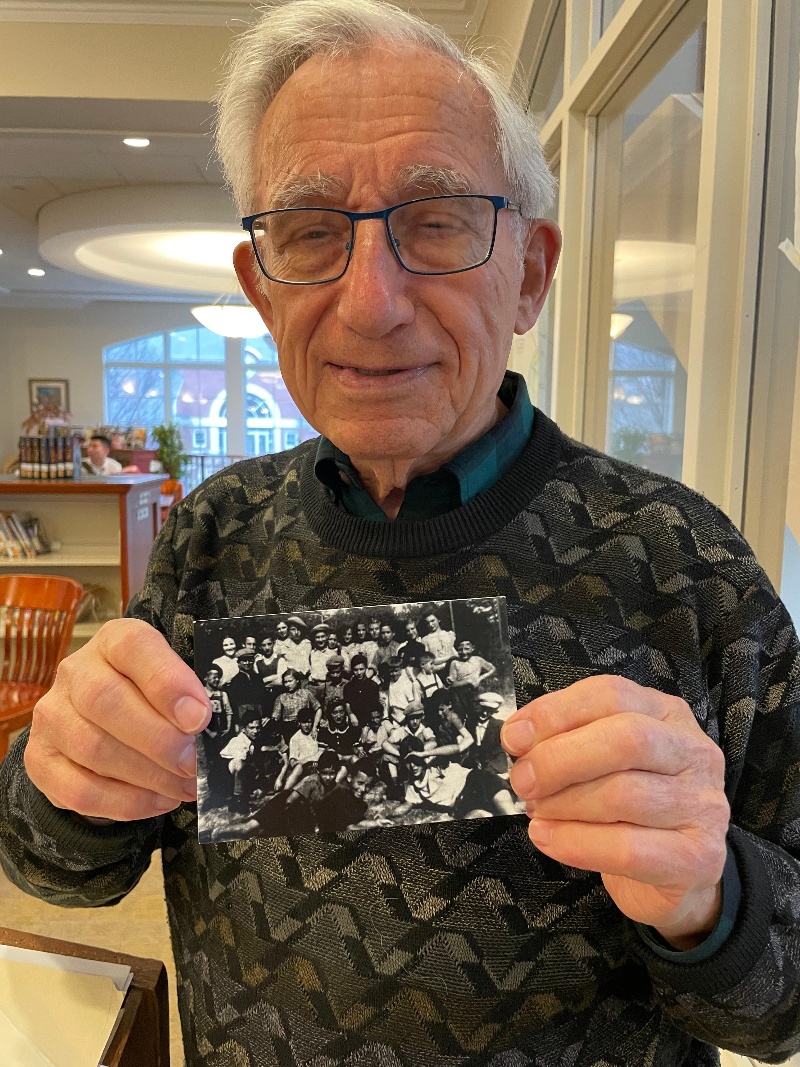 Manny Korman with members of the England Kindertransport program.

Knowing she had no other choice, Manny’s mother decided to separate from and send her two young sons off to England’s Kindertransport program, which was accepting up to 10,000 Jewish children. “It was a gamble and she didn’t know if she would see us again,” said Manny. “We left for England on Aug. 24th, 1939. On Sept. 1, 1939, Hitler bombed Warsaw and WWII began.” 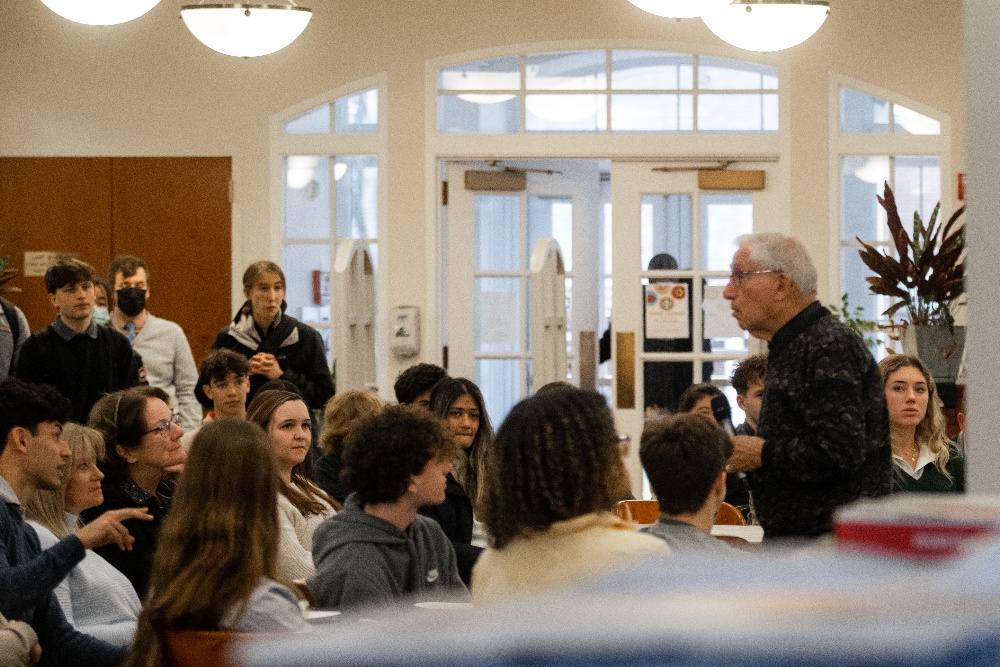 The divided Korman family would not be together again until they all reached the U.S. in 1946 – their journey back to each other, fraught with peril. The ship that Manny, his brother, and his mother took to travel to the U.S. escaped from UBoats that bombed and sank the ships both in front and behind them. Manny’s father, turned away from the U.S. in 1939 as he sat on a ship in the waters off Miami Beach, finally found passage by accompanying a group of hidden children from Holland years later. “I was a nail biter, I stammered, and was a bed wetter until my father arrived in the United States,” said Manny. “And then we became a family again.”

For Leo, reunification with his parents would not happen until 1945 at age 4, when his emaciated mother and father came to collect him in Holland from the only parents he had ever known, his wartime mother and father. “That was difficult for everyone; over several weeks they weaned me away from the people who had taken care of me and saved me,” said Leo, whose wartime family continues to this day to be a part of his family’s lives.

The Dutch economy in shambles and many of their friends killed, the Ullmans decided to emigrate to America. “Even though my father got his job back, a salary, car, and house, it wasn’t right,” Leo shared. “We arrived at the Statue of Liberty in 1947 and my mother was crying… she said, ‘We did it. We beat Hitler.’ We survived and created a life – four kids and nine grandkids later,” said Leo. “We think that maybe we did beat Hitler.”

For both men, their stories reflected back powerful lessons about compassion, but also darkness. “People think our story is similar to Anne Frank,” said Leo. “But it was very different. Anne was an immigrant and never became Dutch. As Dutch Jews, we did not fully accept immigrant Jews. We had a support system, but Anne Frank did not. She was doomed from the start.”

“What should we as human beings be doing?” asked Manny to the crowd of Upper Schoolers who had gathered at lunch to bear witness to his story. “We have a responsibility of caring for each other and caring for people we don’t know. We can’t sit back and say, ‘Let the other guy take care of it.’” 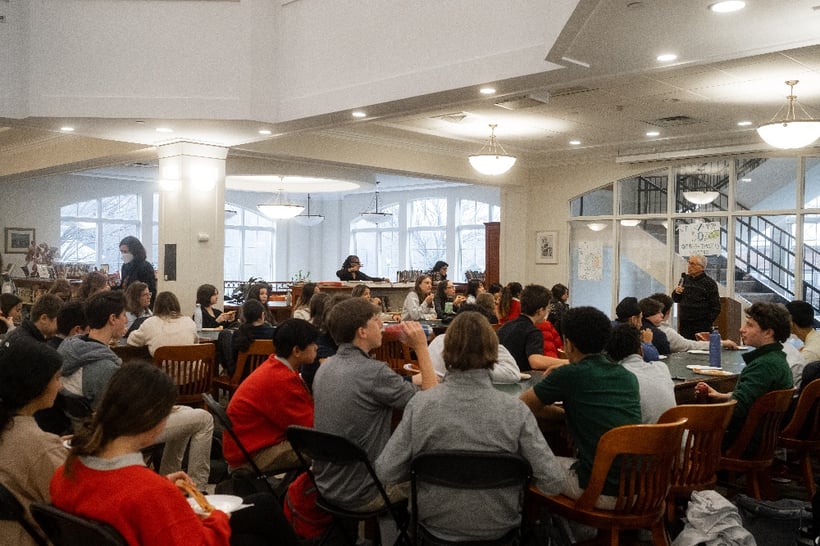 One of the youngest Holocaust Survivors, at age 83, Leo explained his need to share his story to the Middle School students in grades 5-8 who had assembled in the Theater to hear him. “When I came to the U.S. I did not want to be different and I didn’t let anyone know what had happened. It wasn’t until maybe 20 years ago that I began to share my story,” said Leo. “The story of the Holocaust is so important and so different from everything that has happened since – a government killing people systematically in order to wipe them out; and the role of propaganda of demonizing Jews was so critical. That story has to be told over and over.” 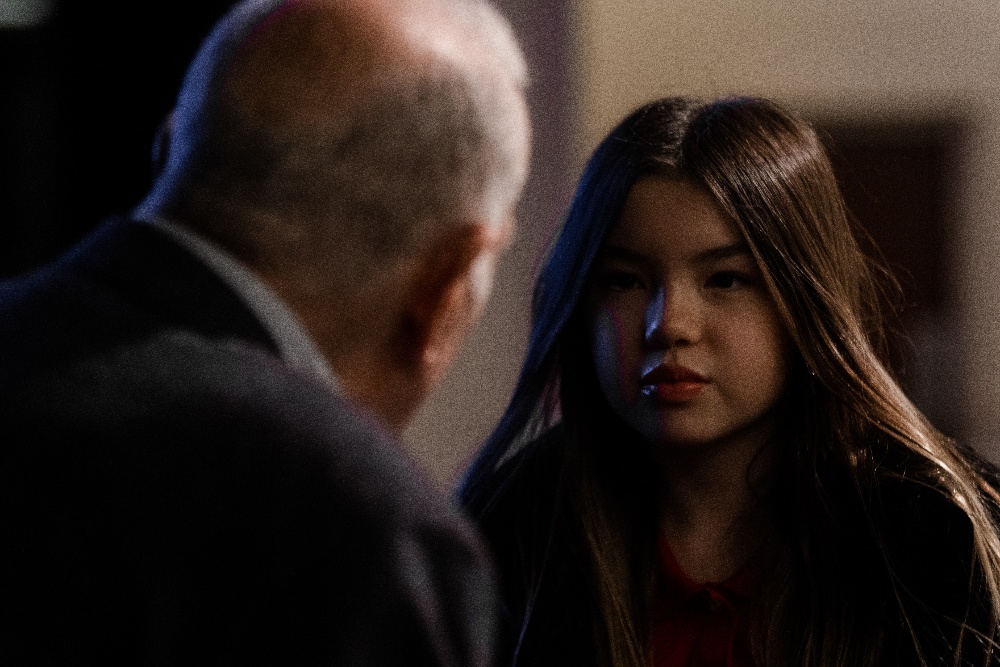 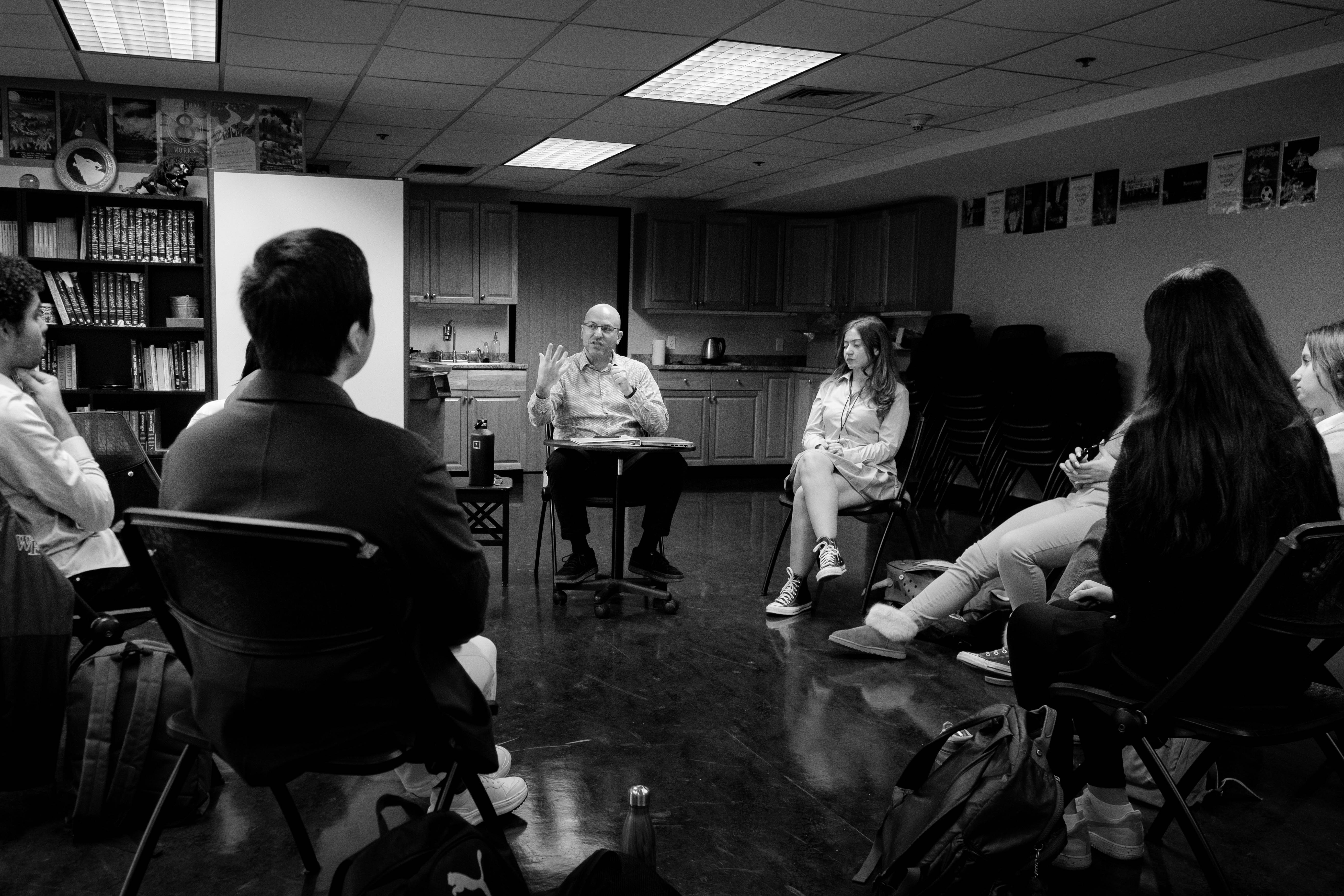 Bringing Shakespeare to life, one soliloquy at a time 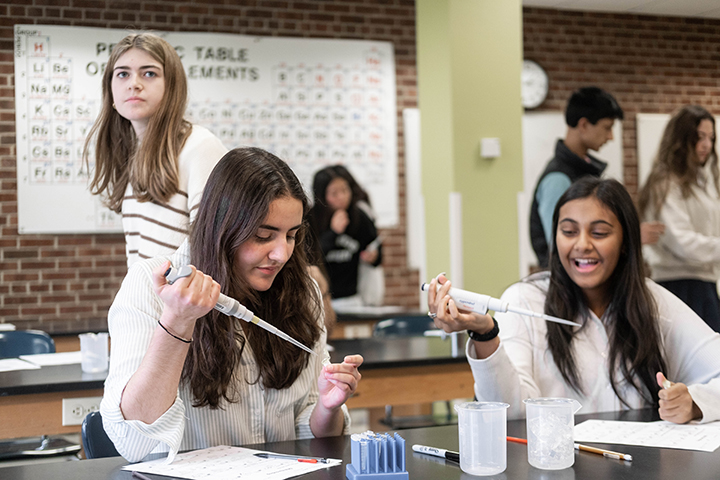 Exploring the world of micro-science 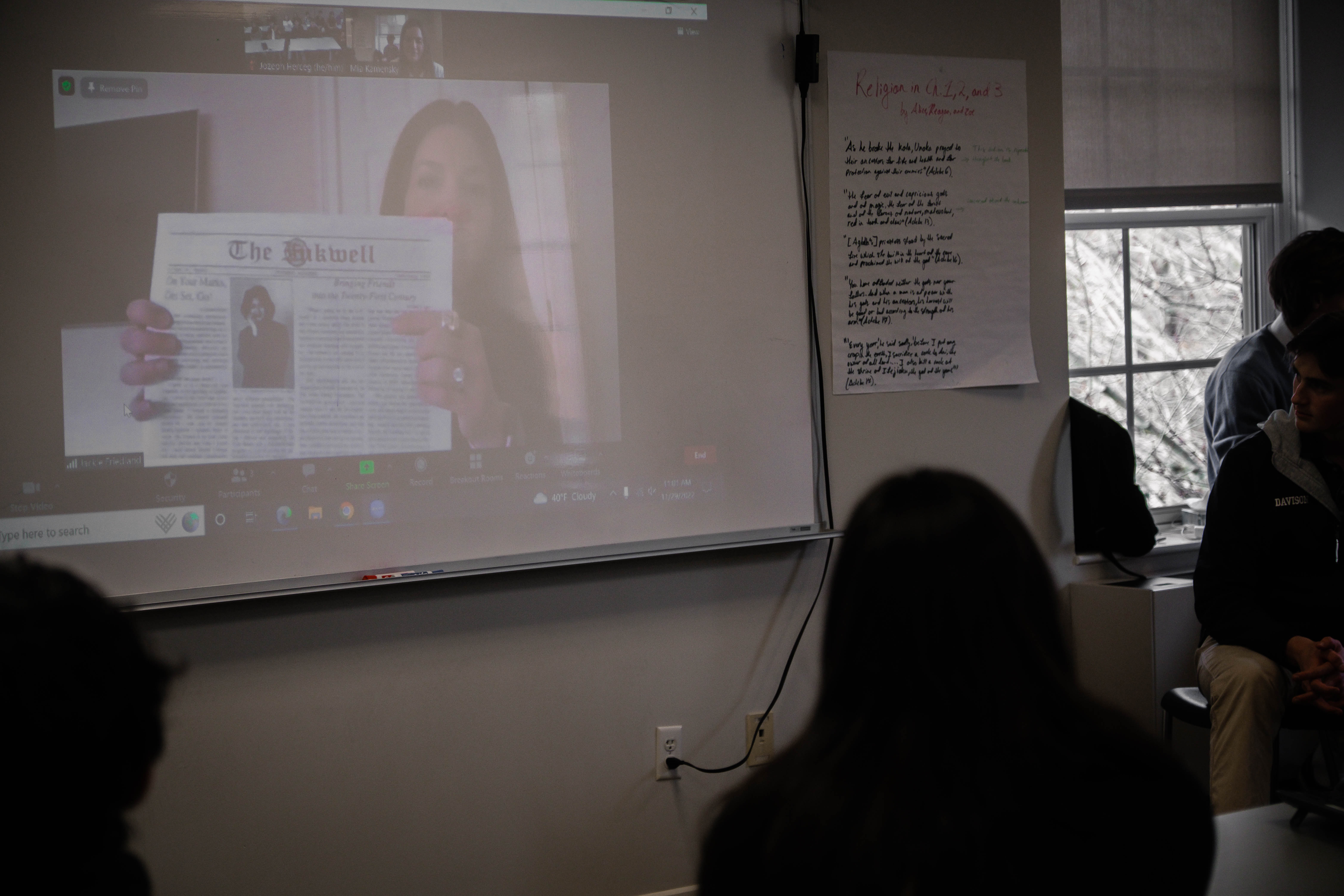